We start off un-prepared! Hurrah for Michael in Stgt!

Barenaked Ladies! Jinx! Holly will steal from children! Underwear. Yay for a francy breakfast in vegas and boo to conventions!

Walt is a LIAR and is weak! New Dolly CD with a francy cover. Nessa has never seen a special Dolly movie. THE SHAME! Walt loves his dollie.

Shout out to an oh so special podcast. Sarcasm is just another product we offer.

9-5 the TV show. Sally Struthers turns into celebrity smells, All in the Family edition! Walt throws back to a Pod is My Copilot episode
and Nessa risks her life.

Boo to no Chik a Fils! HMDWL Sara Davis?!

Holly played hookie and could have got caught...and died. Nessa will chance some germs for Bloomingdale's! Walt and Holly discuss
pressies in the workplace.

Walt is licking boots and Sandra Lee is a yuppie whore! Holly and Nessa call bitches! Holly gets Super Bee and Nessa Gets Taylor and Ryan! Ricky is our Downzie Bitch! But you have to be politically correct!

We may need to help Holly get a new job!

Call and leave us a message at 206-309-0790 or email us at weremeanbecauseyourestupid@gmail.com.

You can subscribe and rate us through iTunes! You can also visit our Libsyn page!
Posted by Nessa at 12:19 AM 11 comments:

Look for a kick back to a previous episode!

Labels: Ben Affleck, Huey Lewis is awesome so Holly and Walt can suck it

Nessa is going to jail. The husbands should get together and make their own damn podcast. The Boring Show starring Nick, Ken, and Derek! Awkward! Mario, WoW, and Tivo.


Pre-show marital fighting scars Holly! An outtake at the end will explain it all!

Tons of emails and voicemails! (Thanks everyone!)

You can call our voicemail line at 206-309-0790 or email us at weremeanbecauseyourestupid@gmail.com
Posted by Nessa at 8:35 PM 3 comments:

We're Mean Because Nessa Was a Co-pilot

I had the great pleasure of filling in for Taffy on Pod is My Copilot! I made my copilot debut on episode 47! You really should go check them out at podismycopilot.com and in iTunes! They are a trio of fabulous people and we here at WMBYS say go give them a listen or suck it.
Posted by Nessa at 5:54 PM 3 comments:

Ep 06 We're Mean Because We Have Daddy Issues

Nessa loves her work husband! He brings her cake! Holly naps at work and we decide that Nick chose smother therapy. Note to self, delete this file! Holly admits to watching Oprah! How much did he hate her? Wow! That is a huge F you! Nessa and Holly wonder if it was their dad. Mental health, that's how we roll. *cue poopy music*

We are actually somewhat prepared for this show. Don't worry Michael in Stuttgart, it won't happen again. We drank the podcasting kool aid and answer the survey! No iPhone *cue poopy music*

We need some feedback kids! How many episodes would you like to hear a week? How long is too long? We want to give the people what they want.

You can see Walt's Tears for Fears pictures at his blog at http://iamwalter.blogspot.com/2008/02/random-pictures.html.

EP 05 We're Mean Because We Gave Up Jesus For Lent

Episode 5 is alive (I know, so witty)

This episode was almost crushed by the Skype gods. Blame Comcast, we did.

Johnny Bravo makes a TV appearance. Nope, he has no standards.

Nessa has flashbacks of an evil nun who didn't want her to wear pants. Corporal punishment. Dinosaur bones and Jesus Camp. Where the hell did Mary and Joseph come from. And we have a title for the show. All the cool kids go to hell.

Valentines day? This means TV and binge eating in our world. Walt calls Holly out. It's the dog's fault! Holly and Nessa have cold black hearts. No gifts for you! Valentines is not Christmas! Easter is only good for the candy! It pays to have a man in retail. Our spouses need 2nd jobs! They're selfish.

Frankenklinger! Jamie Farr but not as pretty. Lets hear it for lactating! So inappropriate! Holly's a boy? What? Frankenklinger is Jeff Conoway's mom. Walt throws up in his mouth.

We smell like denial. Hey, leave us a review on iTunes.

No more TV for Nessa! Noooo! Walt and Holly discuss Survivor. Get some Crest White Strips Johnny! Danny Bonaduce is totally crazy and we love it! Celebrity boxing. Reality TV is like pot.

Paris Hilton smells like...How many inches was that? We lost count.

Emails and Voicemails! Check out the salt shakers and Terminally Single.

Tim, we love that you know when the Love Boat comes out (March 5th)! Nessa pretends to know TV trivia.

Turns out Nessa knows something about Ken's favorite movie and Nessa freaks out!

Walt is jealous that Holly and Nessa have multiple bitches! Erik from Seattle and Michael in Stuttgart yumzies!

In this half we discuss having no food in the house and Walt and Nessa not drinking soda. Go Venus!

Sweet dreams are made of this? Clowns are scary.

American Idol...Too nice! Give the people what they want! But still we get sucked in to vote. Bo Bice, Holly? Really? Kevin Spacey? Really?! Jump on them and wiggle! Dr. Drew, yumzies!

Bad music on the iPod. NKOTB! Jordan Knight is an ass. Finger! Casting a Lifetime Movie staring Will Smith as Walt and Valerie Bertanelli as Nessa. Who would play Holly?

The Other Sister, What's Eating Gilbert Grape, we are going to hell. Life Goes On with Corky.

Outtake at the end of the show!

Surprise! Part One of episode Four.

Scottish people drink a lot of booze and no he is not wearing a kilt!

Venus and Nicole's prom pictures! Nessa was a bitter fat girl, Walt stayed home, and Holly wore lots of lace and big hair. Everything is bigger in Texas! Suck it Nicole! Holly and Nessa need super fans, call in and volunteer!

Check out Walt's pal's web site at comicmix.com. Just do it!

Holly isn't sick! Bets on malaria? Who wants to send us tapeworms?

We want Nelly on the Sureal Life! What's the deal with Rosie?

Going to the Oprah Show. When you're rich, you can pay people to be pompous! Walt and Nessa ponder a future career.

Part two will be out soon!

You can also listen through our LibSyn page!

We're Mean Because We're On The Top Of The World

Thank you everyone! You're overwhelming support has not gone unnoticed. We appreciate you all so very much. 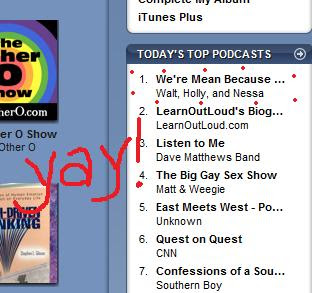 EP-03 We're Mean Because of Cake

Walt shares pictures of his naked self on his blog and Holly plays Tarzan. Nessa says no to boobie shots. Walt offers to pull down his pants. Curious about Big Fatty? You can find him at bigfattyonline.com! So charming without farts noises. Ruined!

Holly shares her stash and we transfer the blame to another podcaster. It's birthday month again!

Our first "we suck" email and Walt has a #1 fan! Voicemails are really really good! Holly will cut a bitch! Walt goes fan-girly for Alexander Schultz!

Another plea for presents!

Outtake at the end of the show!

You can also listen to us at our LibSyn page!

We're Mean Because You Upload Music To iTunes

Most recently played: "Half A Heart" by Jill Sobule
Most played: "Watching Without Words" by Alexander Schultz
Most recently added: "Emotional Rescue"

First song that comes up on Shuffle: "Somebody Stand By Me" by Stevie Nicks 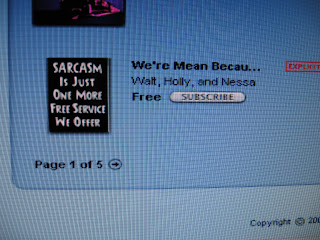 I have no idea how this even happened, but we're on page 1 of the Featured Podcasts in the Personal Journal Category! Yippee for us!
Posted by Fairy Princess Holly at 6:21 AM 5 comments:

We're Mean Because We're On Page 2!

Don't know how long this will last, but seriously, we're excited!
Posted by Nessa at 5:20 PM 3 comments:

Episode two bitches! This episode skype hates us, so skype can suck it.

We discuss people ripping us off, how greedy McDonalds really is, and leaving your purse and cameras in bad places.

Emails and voicemail galore! Walt checks his penis at the door and goes down under.

More "What does that celebrity smell like" presidential nominee hopeful edition.

An Outtake at the end of the show!

You can also listen to us at our LibSyn page!

Call our listener line at 206-309-0790 or email us at weremeanbecauseyourestupid@gmail.com.
Posted by Nessa at 5:31 PM 7 comments: